A call between two old friends in January led to a championship and a pending trip to the Pro Football Hall of Fame for some young local athletes.
Now the South Jersey Vikings are hoping the community will help them make the trip to Canton, Ohio, a reality.
A GoFundMe page has been set up to help pay the 10 and under traveling football team’s expenses to play in the Gridiron Classic from July 23 to 25.
The South Jersey Vikings debuted this year, joining players from Atlantic, Cape May and Cumberland counties, who normally are on opposite sidelines.
“This season is really cool getting to know everyone from other teams, and I learned to work a lot more,” said 11-year-old Colin Prokson from Dorchester, Maurice River Township, who plays on the offensive and defensive lines.
“Playing for the SJ Vikings has been great because I got to meet and play with kids I usually play against,” said cornerback Cole Garreffi, 11, from Upper Township.
“Now they are my brothers,” said Kaleb Lombardo, 10.
The South Seaville boy is the center and plays defensive end.
It all started with a phone call between coaches Joe Handle of Brigantine and Dan Lombardo of Dennis Township.
The two friends are now taking their team to the Gridiron Classic, after winning the 10U championship in Roselle, Union County. Their 14U team — which included a female player — finished 3-0.
“I love playing with the South Jersey Vikings and playing and learning from kids from other leagues,” said James “Chunk” Germanio, of Dennis Township.
The running back is the team’s youngest player at 8 years old.
Practices started in February, with the first tournament in Akron, Ohio, in March.
The kids lost there.
But Quarterback Joey Handle IV sees this return to the Buckeye state as a chance at redemption for his team.
The 11-year-old from Brigantine noted that Ohio is the place “where it all began, where we learned how to work together as a team,” but it’s also “where we got our butts whooped.
But Coach Handle told his team, “We are looking through the windshield, not the rearview mirror.”
“We had some rough times in the beginning, but we learned to trust each other and play together and became family,” said Atlantic City’s Giuseppe DiPaola, 11, who plays on both the offensive and defensive lines. “It’s so cool to be invited by Sports Illustrated to play at the Hall of Fame.”
Seth Germanio, 11, of Dennis Township, said to make it this far with kids who are normally on different teams is something to be proud of.
“I think we played really good football throughout the seven months we’ve been together and will continue that when we get back to Ohio,” the running back/cornerback added.
“It started off rough, but we stuck together to win,” said Mays Landing’s Uthman Mitchell, 10, who plays running back and strong safety. “I feel great to be going to the Hall of Fame.”
Gabe Garcia, who plays on both the offensive and defensive lines, said being part of a team is good for him.
“Playing together,” said the 11-year-old from Brigantine.
“I can’t wait to travel to the Pro Football Hall of Fame and help put South Jersey football on the map,” said running back and offensive linebacker Dylan Granzow, 11, of Mays Landing. “All you ever hear about is North Jersey football. It’s time to let everyone know South Jersey came to play.”
“I feel good about this season,” said 11-year-old Hunter White of Belleplain, who plays running back and defensive end. “It’s been fun and full of new experiences.”
Elijah White is looking forward to the challenge.
“The Hall of Fame is going to be so fun,” said the 11-year-old wide receiver and offensive linebacker from Hamilton Township. “Especially if the other teams throw the ball my way on defense.”
“I like the way I am coached to be the best in my position,” said offensive/defensive lineman Judah Gillespie, 11, of Hamilton Township. “My teammates are my brothers on the field.”
Head Coach Handle and Assistant Coach Lombardo were joined by Assistant Coaches Mario Laing, Jerry White and Jason Steelman.
“South Jersey Vikings is a great team,” said John Ortiz, 11, of Atlantic City. “It helped me get way better.
“Thank you to all the coaches and teammates that helped me improve, and thank you to the parents for taking us to practice and allowing us to play the game we love, football,” added the running back who also plays free safety.
“The season was nice and we got to travel around the country,” said Izzy Rowell-Washington, 11, of Atlantic City.
“I feel great about Ohio,” the running back/offensive linebacker added. “We’re gonna win.” 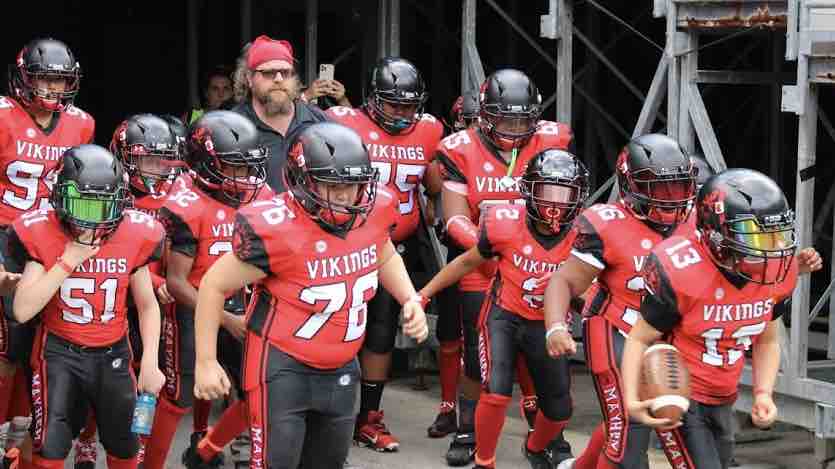